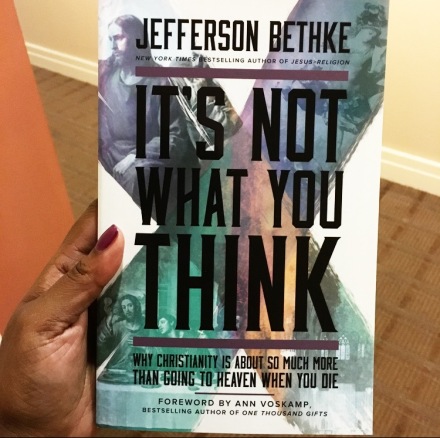 I along with Christians all over the world are preparing my heart, mind, and soul at the beginning of this Lent Season.  Lent (a 40 day season) is a time to reflect, sacrifice, and grow stronger in the Lord in preparation for Easter Sunday.  I often go to church to start Lenten Season and decide what I’m going to give up for the 40 day period.  Last year I followed a reading plan on the Bible app.  I will do that agin this year, but I will also include this read:

It’s Not What You Think: Why Christianity Is About So Much More Than Going To Heaven When You Die by Jefferson Bethke.   A couple of weeks ago, I came across this book in Barnes and Noble.  It was really the end of the title that caught my attention.  I’ve been a born again believer since a very young age and I think it will be a good chin-check for me during this Lenten season about what I am doing with my Christianity.  The back cover:

“Jesus was most upset at people for seeing but not seeing. For missing it. For succumbing to the danger and idolatry of forcing God into preconceived ideals. What if there were a better way? What if Jesus came not to help people escape the world but rather to restore it? Best-selling author and spoken word artist Jefferson Bethke says that Christians have the greatest story ever told but we aren t telling it. So in this new book, Bethke tells that story anew, presenting God s truths from the Old and the New Testaments as the challenging and compelling story that it is a grand narrative with God at the center. And in doing so, Bethke reminds readers of the life-changing message of Jesus that turned the world upside-down, a world that God is putting back together.”

The author has been quoted as saying “Christians have the greatest story ever told, but we aren’t telling it.” I feel very convicted.  I read a lot of great reviews about how powerful and thought provoking this book is.  I can’t wait to share my thoughts!